The presentation of this guide took place in the National Library at The Hague on Friday 25th January 2008. The presentation was accompanied by an afternoon of lectures on the theme ‘Geheime kennis. The bijzondere archieven en bibliotheken van maconnieke en esoterische organisaties’ (‘Secret knowledge: the unique archives and libraries of Masonic and esoteric organizations’).

Drs Kroon also made a strong plea for stocktaking of the remaining archives of esoteric organizations in private ownership on a national level. Many (small) esoteric organizations find their historical collections a burden rather than a blessing. They are frequently contacted by students and scholars, as well as their own members, with requests for access to their archives. Although most organization wish to allow such access, they are forced to refuse because they lack the means, experience and personnel to accommodate visitors. Lack of storage space, conservation issues, lack of professional heritage-management skills, a lack of manpower and funds are some of the most frequently encountered problems. Donating an archive to a municipal archive can seem an ideal solution, but archives can then remain inaccessible for several years, as they await inventorying. And as the OVN project showed, there is so little knowledge of esoteric currents in the archive sector that simply identifying documents is a problem, let alone advising scholars.

This is why the OVN aims to coordinate a new project, aimed at preservation and accessibility of esoteric archives. Two mixed Masonic orders and one spiritualist organization in the Netherlands have already agreed to actively participate. Other Dutch esoteric organizations who wish to join in are welcomed. But the problem is one of a national, if not international scale. This is why cooperation between academic, heritage and esoteric organizations is necessary, if we want to ensure the preservation of esoteric archives, libraries and object collections for future generations. 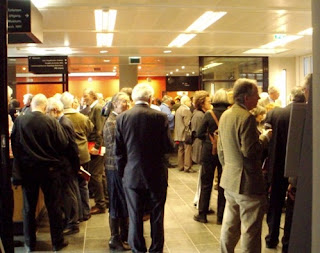 Posted by Mark Sedgwick at 9:59 AM