Report on the Conference on Western Esotericism held in Åbo/Turku, Finland, August 15-17, 2007

A sure sign of the vitality of esotericism studies is the fact that it was possible to attract scholars to two separate conferences on this topic, held within three weeks of each other. Almost immediately after the European Society for the Study of Western Esotericism had completed its first conference in Tübingen, the Donnerska Foundation hosted a conference on Western esotericism in Åbo/Turku, Finland (Åbo is the Swedish name, and Turku the Finnish name; the Donnerska Foundation uses Swedish).

The theme of the conference was linked to its geographical location. Besides accepting papers on any aspect of the study of Western esotericism (as exemplified by contributions on subjects as diverse as Christian theosophy, the legacy of Rudolf Steiner and new religious movements in Russia), the organizers particularly encouraged participants to present papers that dealt with esotericism in the Scandinavian countries. Papers on Freemasonry in Sweden and Finland, on symbolist art in Finland, on kabbalah in Sweden, on the theosophical movement in Denmark and on Swedish queen Christina’s esoteric interests are just a few examples of the latter.

The geographical focus was particularly reflected in the choice of keynote addresses. Scandinavia has throughout the centuries been a recipient of esoteric currents coming from the European continent. In the early modern period, Hermetic and Paracelsian ideas and practices were highly influential in Scandinavian intellectual milieus. Jole Shakelford has for years been researching the influence of Paracelsian medicine in Denmark and Norway, and presented some of his findings in a paper entitled “Western Esotericism and the History of European Science and Medicine in the Early Modern Period”. 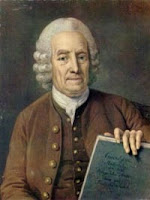 The Scandinavian countries have also contributed original building blocks to the esoteric discursive repertoire. The best-known example is Emanuel Swedenborg, the topic of a paper by Jane Williams-Hogan entitled “The Place of Emanuel Swedenborg in the Spiritual Saga of Scandinavia”. Other figures may be of lesser international fame, but have nevertheless decisively influenced the course of religious history in Europe. Mark Sedgwick’s paper "Ivan Aguéli, Europe’s first Sufi shaykh" introduced the arguably first neo-Sufi in European history, as well as one of the formative influences on René Guénon.

Paracelsian, mystic and neo-Sufi currents such as these constitute just some of the many alternative and partly marginalized aspects of the larger European religious landscape. This is an ecology of coexisting and competing voices which has traditionally but erroneously been described as if one set of religious actors–mainstream, theological Christianities–had established an unquestioned hegemony. Kocku von Stuckrad’s paper “Esoteric Discourse and the European History of Religion: The Emergence of a New Interpretational Framework” served as a topical reminder that Western esotericism inscribes itself in the broader field of a plural European history of religions.

The study of Western esotericism has in the last decades developed from a narrow field dominated by a handful of scholars, to being a major area of research. Esotericism outside the geographical and linguistic centre of Europe, however, still remains an understudied area. Olav Hammer’s and Henrik Bogdan’s paper “On the Current Status of Research into Western Esotericism in Scandinavia” surveyed the existing literature on esotericism in Sweden, Norway and Denmark, and pointed out some of the main lacunae in the field. One reason for the scarcity of research has to do with the concentration of research activities on a few historical currents and the almost complete neglect of others. Another reason is the fact that Scandinavian scholars have tended to publish their findings in local languages, making them virtually inaccessible to their colleagues in other countries.

Hammer and Bogdan, however, also presented two initiatives that will go a considerable way toward improving this situation.

Olav Hammer’s closing address noted that the study of esotericism over the last three decades has unearthed a mass of historical data, but that scholars have with few exceptions been much more reticent to place these data in broader theoretical frameworks. Even the nature and identity of the very label ‘esotericism’ is far from settled. As this young field matures, the study of esotericism will no doubt continue to grapple with these and other truly fundamental theoretical issues.

Posted by Mark Sedgwick at 11:27 AM No comments:

While riding his bike over the Amsterdam canals in the autumn of 1957, 16-year old Joost R. Ritman conceived the idea of founding a library devoted to the Hermetic tradition. Fifty years later, on October 26, 2007, the now famous Bibliotheca Philosophica Hermetica celebrated its 50-year jubilee with a splendid exhibition, Jacob Boehme’s Way into the World, preceded by a two-day conference for invited guests.

There was indeed much cause for celebration, for not only did the BPH survive a serious crisis during the 1990s when the invaluable collection of incunabula and other early prints risked being put up for auction, but it has emerged from those difficult years more strongly than ever before. The library staff was expanded, many new exhibition and research/publishing projects were initiated, and perhaps most spectacular of all, the BPH’s founder recently acquired one of the most famous monumental buildings from the 17th century Dutch Golden Age: the “Huis met de Hoofden” (House with the Heads), located on one of the Amsterdam canals, which will become the library’s future home.

The Huis met de Hoofden (image, right, courtesy of bmz.amsterdam.nl) carries special significance for the BPH both historically and symbolically. In 1634 it was acquired by the Dutch merchant Louis de Geer, whose collection of books on heterodox religious traditions showed many similarities with the present collection of the BPH. In the same house, de Geer offered hospitality to Jan Amos Comenius, whose beliefs and aspirations of spiritual reform strongly resonate with those that inspired the present library’s founder. It was therefore appropriate that the participants in the BPH’s Jubilee Symposium were received on this historical spot.

Speakers at the symposium were:

The symposium was followed by the official opening of the exhibition on Jacob Boehme, with a presentation of the first copy of the exhibition catalogue to the Dutch minister of Education, Culture & Science, R.H.A. Plasterk. This catalogue is in fact much more than a catalogue: it is also an important collection of scholarly essays on the history of the transmission of Böhme’s work and the crucial role that was played in this regard by the Dutch Abraham Willemsz van Beyerland.

The exhibition – including a unique collection of Böhme manuscripts – is open to visitors, and is warmly recommended to members of the ESSWE. Further information can be found at the BPH’s website.

Jacob Böhme’s Way into the World

Just published in connection with the Jubilee Symposium of the Bibliotheca Philosophica Hermetica:

Apart from the extensive documentary part, the volume contains fourteen articles, most of which are of considerable scholarly interest.

Translated into English, they are as follows:

Posted by Mark Sedgwick at 4:48 PM No comments: 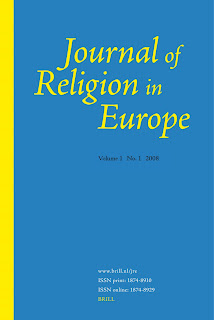 The academic publisher Brill (Leiden, The Netherlands) is launching a new journal that responds to the recent development in the study of religion and culture in Europe. From 2008 onwards, the Journal of Religion in Europe (JRE) will publish articles, book reviews, and thematic issues that address historical and contemporary issues related to religion in Europe from various disciplinary perspectives. For scholars of western esotericism, this will create a forum of interesting exchange of thoughts and interpretations. For instance, the question "what is 'western' in 'western esotericism'" is directly linked to problems of definition of 'Europe.'

The JRE, which will consist of three issues per year, has the following scope:

“The peer-reviewed Journal of Religion in Europe (JRE) provides a forum for multi-disciplinary research into the complex dynamics of religious discourses and practices in Europe, both historically and contemporary. The Journal’s underlying idea is that religion in Europe is characterized by a variety of pluralisms. There is a pluralism of religious communities that actively engage with one another; there exists a pluralism of societal systems, such as nation, law, politics, economy, science, and art, all of them interacting with religious systems; finally, in a pluralism of scholarly discourses religious studies, legal studies, history, anthropology, sociology, philosophy, and psychology are addressing the religious dynamics involved.
The JRE encourages new kinds of publications that respond to the changing European dimension of social and cultural studies.”

For details see the Journal's website at www.brill.nl/jre.
To submit an article for the Journal of Religion in Europe, please send your paper as a Word file per email to the Editors-in-Chief or to Ms. Regine Reincke, Acquisitions Editor Social Sciences and Religious Studies at Brill’s (reincke@brill.nl). For guidelines on submitting an article to the JRE, please contact the Editors-in-Chief or see the Journal's website.
Posted by Kocku von Stuckrad at 6:26 PM No comments:

November 2007 membership statistics, just released, show that the ESSWE membership is heavily concentrated in the Netherlands, the United States, and the United Kingdom.

More than 5o% of the members resident in Europe came from just two countries: the Netherlands (44) and the United Kingdom (42). Adding three further countries (Germany, France, and Denmark) accounts for 80% of the European members. 12 other countries, with between 1 and 5 members each, made up only 20% of the membership.
Posted by Mark Sedgwick at 11:00 AM No comments:

The access rules have been changed so that anyone can read this blog.
Posted by Mark Sedgwick at 10:48 AM No comments: