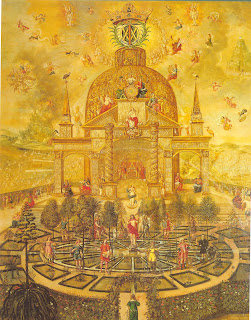 I remember very well how in the first half of the 1990s, Antoine Faivre and I were talking about the necessity of getting Western esotericism recognized as a field of research, and of the absence at the time of all those things that belong to an established field, such as academic chairs, teaching programs, peer-reviewed journals, monograph series, scholarly organizations on a national and international level, interdisciplinary exchange with other disciplines, and so on and so forth. At the time, there was nothing, or almost nothing.

That was no more than 15 years ago. And now I suddenly found myself standing on a podium in Tuebingen looking at a crowded lecture room full of scholars, including many students and ph.d. students, from many countries, who all shared a real, serious and enthusiastic commitment to Western esotericism as a field of research, and for all or whom (at least, so I imagine) the question of its academic legitimacy is no longer an issue on which to waste one's time.

This is how far we have come in so short a period of time.

The presence of so many young people - students who had taken the trouble to travel all the way to an academic conference like this - was particularly inspiring: it means that Western esotericism is no longer a pursuit dominated by a relatively small circle of "usual suspects" belonging to the older and middle generations (although it was obviously fantastic that almost of them were there as well), but that it has taken root among those who will take the field into the future.

In short, it was a historical event indeed: the moment, as far as I'm concerned, when Western esotericism has definitively "come of age".

Posted by Wouter Hanegraaff at 5:33 PM

Yes, it was indeed a historical moment. And the study of Western esotericism may have come of age. It may be a telling sign, then, that the borders of the concept of WE seem to be more blurred than ever. Thus, it was quite interesting to note Antoine Faivre's frequent reminders that things that were being discussed do not really qualify as part of WE in his view. Apart from him, nobody else seemed to care much about that. Most people seemed to be quite happy and excited to have found a new platform, regardless of its conceptual stability. Interestingly, in his presentation Wouter, if I have understood him correctly, already seemd to pave the way for the scholarly deconstruction of the label that everybody seemed to so happy to subscribe to. So, it will be interesting to see what happens in another 15 years.

More sentimental thoughts . . .
What comes to mind is the story of a group of scientists analyzing a specimin in a dark room. One says, "It's long and flexible;" another says, "No, it's cylindrical and rigid;" yet another rebutts, "No, it's like a giant round leaf." They turn on the light to find that their subject is an elephant, and that each analysis is correct in its own right.

I revere Faivre as the Grandfather of Western esotericism in Academia, though I am relieved to hear that my offerings in our field have not been the only ones he has dismissed.

I revere Wouter and our other colleagues doing the heavy lifting, truly, as heroes--Bravo!

On Wouter's point, I have been a young(ish) informal student of WE for some years now. I now find myself at The University of Exeter, doing an MA in Theology (Ethical Theory centred), but due to the flexibility, and interdisciplinary nature of the school of humanities have been permitted to take the core module of the MA in WE. I have been waiting for some time now to find an enlightened University that offers MA/Doctoral study of WE. To my mind there is no doubt that here in the UK, with an institution as "traditional" as Exeter Uni offering the WE course, it is a legitimate and to my mind neccessary, self-contained discipline. The level of interest shown by my fellow Humanities postgraduate students when I describe the course to them, shows the younger generation are fascinated by the subject. I do not know the history of WE in academia in Europe, or upon whose shoulders I gratefully stand, but I feel certain that WE has the "young blood" commencing the journey into acedeme to guarantee its future as an important discipline. I personally am at the start of that journey, but hope to enter academe post-doctorally some years hence, and continue the obviously impassioned work of those that have worked tirelessly to get WE accepted as a serious discipline in its own right. To my mind WE stands as an essential counterpoint to the current philosophical Western Canon, the study of the former is invaluable in the understanding of the hisory of ideas. I am new to the formal study of WE but hope to learn much from the members of the society. And to share my learning in the spirit of open collaboration.

As for scholarly deconstruction, to my mind this is to be welcomed, as a sign in any new disipline of its maturity and neccessary development. When disciplines enter a phase of meta-philosophical debate, they have truly "come of age".